Stephen King's The Mist Wiki
Register
Don't have an account?
Sign In
Advertisement
in: Characters, Film Characters, Military,
and 2 more 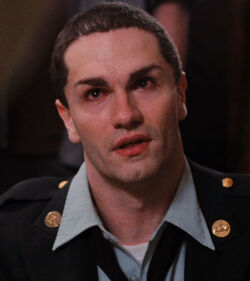 Private Wayne Jessup was a member of David's group and also the expedition to the pharmacy. He appeared in both the film and book.

In high school, Jessup had a crush on Sally, and flirted with her, but never drew up the courage to ask her out.

He, Morales and Donaldson are on a ten-day leave, and arrive at the Grocery Store. However, the three are disappointed when an MP arrives to inform them that all leaves are cancelled, and orders the three to meet him back at his jeep in five minutes. However, Morales, Donaldson and Jessup are trapped inside the store when the Mist engulfs the town outside the market.

On the first night of the phenomenon, Jessup confesses his feelings for Sally to her in the locker room, and the two share a passionate kiss. However, shortly after, Sally is stung by a Scorpion-Fly when Scorpion-Flies and Pterobuzzards break into the store. Jessup attempts to save Sally, but the Scorpion-Fly's neurotoxin kills her.

The next day, heartbroken by Sally's death, Jessup joins David and the others in the expedition to King's Pharmacy. When they arrive there, they discover the MP cocooned to a pillar in web silk. David and Jessup try to pull the MP down, only to watch in horror as he screams that the mist is the Government's fault, then hatches a swarm of Gray Widowletts.

The group is then attacked by the Gray Widower parents, and David and Jessup try to save an unconscious Bobby, but when Bobby dies of his leg wound, Jessup leaves his body to be devoured by the Gray Widowletts. Jessup and the rest of David's group other than Mike escape the pharmacy back to the market.

After the excursion to King's Pharmacy, David's group confronts Jessup over what the MP said prior to his death. Jessup then helps the group search for his two friends, only to find that they have hung themselves in the loading dock over the guilt of what they had done. Unfortunately, Jim, a recently converted follower of Mrs Carmody's 'cult' catches them and drags Jessup out to confess. Jessup explains that the Arrowhead Project opened a doorway to another world, and The Mist came pouring through, bringing the monsters with them. Angered by this 'affront to God' Mrs Carmody orders the sacrifice of Jessup to the creatures outside. Jessup is attacked, mostly by Jim and Mr Mackey, who stabs him brutally in the stomach, before he is carried to the front door and thrown outside (as David's group who is terribly outnumbered can only helplessly watch). Jim locks him out, and Jessup can only plead for mercy as an Arachni-Lobster grabs and kills him.