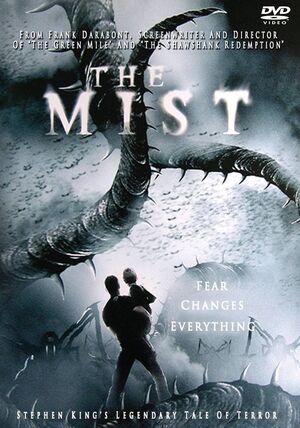 The Mist (also known as Stephen King's The Mist) is a 2007 movie adaption of Stephen King's 1980 novella of the same name, directed by Frank Darabont.

The morning after the small town of Bridgton, Maine is struck by a violent thunderstorm, commercial artist David Drayton, his son, Billy, and his wife, Stephanie, witness a mysterious mist moving across the lake towards their lakeshore home.

Concerned with cleaning up the aftermath of the storm, David, Billy and their neighbour, Brent Norton, head into town, to the local grocery store, where the patrons' attention is drawn by an unusual amount of police and military activity. A bloody-nosed Dan Miller rushes in, ranting about something in the mist taking John Lee.

The patrons watch as the mist moves across the parking lot towards the market and engulfs it. The market is then struck and damaged by violent tremors. A woman with kids at home eventually asks for someone to escort her home, but everyone refuses, so the woman goes out into the mist alone, towards her car.

When David searches the loading dock for something to cover Billy up with, he hears things slithering against the outside of the loading door. Mechanics Jim Grondin, Myron LaFleur, deputy manager Ollie Weeks and Norm the bag-boy attempt to fix the generator by sending Norm out to unblock the generator exhaust pipe, but as the loading door is opened, he is dragged to his death by a swarm of flesh-eating tentacles.

The others report the situation to the people in the market, but some, including Brent Norton, are sceptical, and mentally unstable religious fanatic Mrs. Carmody is convinced that the End of Days has come. Once the danger is confirmed to only be outside, the patrons who either believe or are in little denial barricade the front store windows with bags of soil and dog food and duct tape the cracks caused by the tremors.

Norton eventually gathers a small group of followers who are in denial of the dangers in the mist, and David and his followers fail to convince them not to go out into the mist. Before they leave, however, a biker who goes with Norton's group to protect them, ties a 300-foot clothsline around his waist to tell the remaining patrons when they get past that distance.

At approximately 200 feet, however, Norton's group is attacked by a large, unseen creature and David and the others are able to drag back only the biker's severed body, proving to the remaining patrons that there are dangerous creatures in the mist.

The next morning, an expedition to the nextdoor pharmacy lead by David and consisting of Ollie, Jim, Irene Reppler, Jessup, Dan Miller, Bobby Eagleton and Mike Hatlen is made to bring back supplies for a horribly burnt Joe Eagleton. The group arrive at the pharmacy and find the supplies they need, but soon realize it is overrun with Gray Widowers; large, spider-like predators which produce corrosive webs. Bobby and Mike are all killed in the ensuing battle, and David, Ollie, Dan, Jessup, Jim and Reppler narrowly escape back to the market. Joe died from his wounds while they were were in the pharmacy, making the expedition fruitless.

As a result of the failed expedition, the remaining survivors in the store are divided into three groups: David's group, which consists of the still-sane, rational-minded survivors, Mrs. Carmody's congregation, which consists of a large number of survivors who have been driven insane by the trauma, and now follow Mrs. Carmody; the latter group now includes a shaken Jim and Mr. Mackey. Finally, the third group is a few people who side with neither David, nor Mrs. Carmody.

David's group eventually discover two soldiers from the military base have committed suicide via hanging, and demand from Jessup what the Arrowhead Project was, and how it caused the disaster.

Jim then appears, having noticed the group acting suspicious and following them, and drags Jessup out. Jessup reveals to Mrs. Carmody and her followers that the Arrowhead Project was an experiment to peer into other dimensions, and was, according to Donaldson (one of the soldiers), the origin of the mist. Mrs. Carmody's followers then sacrifice a terrified Jessup by throwing and locking him out of the market to be killed by the creatures. As Jessup pleads to be let back in, an Arachni-Lobster approaches and kills him.

The next morning, David and his group are about to use David's car to escape the store, but they are intercepted by Mrs. Carmody, who orders her followers to sacrifice first Billy, then Amanda, then David's entire group. However, before her followers are able to do so, Mrs. Carmody is shot and killed by Ollie, causing her horrified followers to snap back to reality, back down, and allow David's group to leave.

David, Billy, Amanda, Reppler and Dan all make it to the Land Cruiser, but Ollie is cut in half by the Arachni-Lobster, Bud retreats back to the market, and Myron and Ambrose are both killed by Gray Widowers.

David returns home to get Steff, but finds his home destroyed, and his wife dead, having fallen prey to the Gray Widowers. Heartbroken, David and the group drive south to try and get clear of the mist, but only find the destruction left in the wake of the mist.

They keep driving until they eventually run out of fuel, and as Billy wakes up from his nap, David shoots and kills him and the three other people in the car with the last four bullets in Amanda's gun to give them a quicker and more pleasant death. David then exits the car to be killed by the monsters in the mist, but instead sees a military convoy pass by and the mist dissipate.

David sees survivors in the convoy, including the woman with kids at home and people from the market. Horrifyingly realizing that he was driving away from rescue, that he needlessly killed his own son and three other people just moments before they would have been rescued, and that they would have been rescued anyway if they had just stayed in the market, David falls to his knees screaming as two soldiers watch in confusion.

Differences from the novella