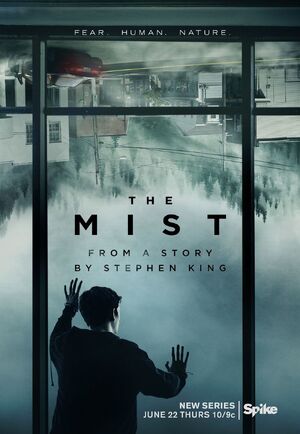 The Mist is a science fiction-horror thriller television series created by Christian Torpe for Spike. It is based on the horror novella of the same name by Stephen King. The first season aired on June 22, 2017, and consists of ten episodes and concluded on August 24, 2017.

On September 27, 2017, the series was cancelled from Spike (now Paramount Network) after one season.

Taking place in the year 2019, an unexplained mist slowly envelopes the city of Bridgeville, Maine, creating an almost impenetrable cloak of visibility. The residents of the town soon learn the situation is even more precarious as hidden within the mist are numerous monsters of various sizes that attack and kill anything that moves.

* The second and third episodes were released online on June 23, 2017.

Following the release of Frank Darabont's film adaptation of The Mist in 2007, executive producers Bob Weinstein and Harvey Weinstein announced plans to develop a miniseries based on the film. In November 2013, Bob Weinstein announced that a 10-part miniseries would begin production under their Dimension Television banner. It was unclear if film director Darabont would be involved in the series and the development remained stagnant for a period of time.

In September 2015, nearly two years after the project was announced, Dimension Television announced they had signed screenwriter Christian Torpe to pen the entire series. In February 2016, Spike picked up the pilot. In April 2016, it was announced a deal had been reached with Spike to air the entire series. In July 2016, the production company announced the series had been cast and gone into production in Halifax, Nova Scotia.

The ten episodes of the first season were reportedly produced on a budget of approximately $23 million dollars. The government of Nova Scotia announced in July 2016 that it would contribute $5.9 million for the series. The production marks the biggest entertainment production to ever shoot in the province.

Official Trailer The Mist (From a Story by Stephen King)

The Mist 'Out There' Official Trailer

The Mist - "Destruction" (Teaser)
Add a photo to this gallery

The Mist 'Welcome to Bridgeville' Official Featurette Meet the Cast

'Reimagining The Mist' Official Featurette Behind the Scenes

Retrieved from "https://stephenkingsthemist.fandom.com/wiki/The_Mist_(TV_series)?oldid=9835"
Community content is available under CC-BY-SA unless otherwise noted.