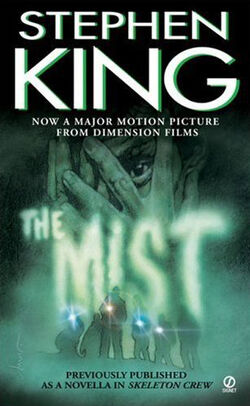 The Mist is a 1980 novella published by Stephen King in his short story collection, Skeleton Crew. The story centers around a group of people who are trapped in a local grocery store by a thick mist which conceals otherworldly monsters.

The morning after the residential community of Bridgton, Maine is struck by a vicious electrical storm, business atist David Drayton, his child, Billy, and his better half, Stephanie, witness a strange fog moving over the lake towards their lakeshore home.

Worried about tidying up the fallout of the tempest, David, Billy and their neighbor, Brent Norton, head into town, to the nearby market, where the benefactors' consideration is drawn by a bizarre measure of police and military movement.

A bloody-nosed man rushes in, ranting about something in the mist taking John Lee.

The patrons watch as the mist moves across the parking lot towards the market and engulfs it. The market is damaged by violent tremors, and the patrons hear screams in the mist. A woman with kids at home eventually asks for someone to escort her home, but everyone refuses, so the woman goes out into the mist alone, toward her car.

When David searches the loading dock for something to cover Billy up with, he hears things slithering against the outside of the loading door. Mechanics Jim Grondin, Myron LaFleur, deputy manager Ollie Weeks and Norm the bag-boy attempt to fix the generator by sending Norm out to unblock the generator exhaust pipe, but as Norm goes out, he is dragged to his death by a swarm of flesh-eating tentacles.

The others report the situation to the others in the market, but some, including Brent Norton, are skeptical, and mentally unstable religious fanatic Mrs. Carmody is convinced that the End of Days has come. Once the danger is confirmed to only be outside, the patrons who either believe or are in little denial barricade the front store windows with bags of soil and dog food and duct tape the cracks caused by the tremors.

Norton eventually gathers a small group of followers who are in denial of the dangers in the mist, and David and his followers fail to convince them not to go out into the mist. Before they leave, however, one of Norton's followers ties a 300-foot clothesline around his waist to tell the remaining patrons when they get past that distance. At approximately 200 feet, however, Norton's group is attacked by a large, unseen creature and the clothesline is severed, proving to the remaining patrons that there are creatures in the mist.

At night, Ollie sights many disturbances in the mist, ranging in size from that of a person to the size of a house. He comes to the conclusion that these are creatures that are moving silently through the mist. Later, plump, flying creatures land on the store windows, and large, pterodactyl-like predators follow them and pluck them off the store windows to eat, one of the birds eventually breaking into the store. After killing Tom Smalley, the bird-monster is burnt to death by David with a torch, and the hole left by the creature is covered up with crates.

The next morning, an expedition to the nextdoor pharmacy lead by David and consisting of Ollie, Jim, Hilda Reppler, Dan Miller, Buddy Eagleton and Mike Hatlen is made to bring back supplies for the injured, but Jim runs off and is killed by an unseen creature, and the group finds the pharmacy overrun with spider-like predators which produce corrosive webs. Buddy, Dan and Mike are all killed in the ensuing battle, and David, Ollie and Reppler narrowly escape back to the market.

As a result of the failed expedition, the remaining survivors in the store are divided into two groups: David's group, which consists of the still-sane, rational-minded survivors, and Mrs. Carmody's congregation, which consists of a large number of survivors who have been driven insane by the mist, and now follow Mrs. Carmody; including Myron and Mr. McVey.

David and Ollie eventually discover two soldiers from the military base have committed suicide via hanging, and Ollie speculates that the Arrowhead Project released the mist and its inhabitants from another dimension.

David, Billy, Amanda and Reppler all make it to the Scout, but Ollie is cut in half by a giant, lobster-like creature, Ambrose retreats back to the store, and Hattie is killed by one of the spider creatures.

After a failed attempt to return home to get Steff, David and the group drive south to try and get clear of the mist. They encounter the Behemoth, which slowly lumbers past the group, leaving SUV sized footprints in the concrete and being so tall that it is impossible to see past it's legs. After finding refuge for the night in a Howard Johnson's, David possibly hears the word "Hartford" over the radio and the next morning, he prepares to drive on into an uncertain future.