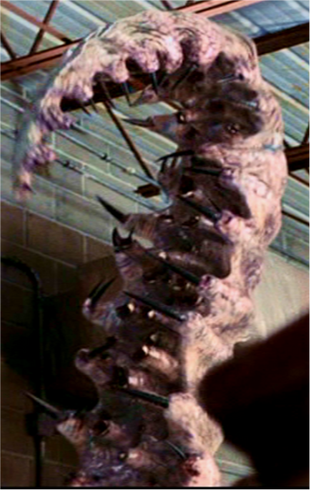 The Tentacles from Planet X, as sarcastically nicknamed by Norton's group, are the limbs of an unseen creature in the Mist, and are known for killing Norm in the storage room.

When David activates the loading door, the Tentacles withdraw back outside, but not before one is severed by the closing loading door.

When David is driving through the mist, he encounters some other Tentacles from Planet X (presumably belonging to another tentacle monster), which block the road but eventually withdraw.

The Tentacles from Planet X physically resemble those of a very large squid or octopus, but they have mouths in place of suckers which they use to consume prey as they envelop it. They also have fleshy-pink flesh on their undersides and slaty grey flesh on the rest of themselves.

In addition to the mouths and resemblance to squid tentacles, the Tentacles from Planet X also have claws lining their sides and a slit-like mouth near the tip. They also seem to be able to emit high, shrieking sounds from their mouths, retract their mouths and claws into their flesh and seem to be a shade of both grey and pink.

When a severed tentacle finally dies, it decomposes into a sizzling, black liquid in seconds. 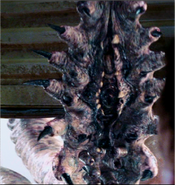 Early concept art for the film.