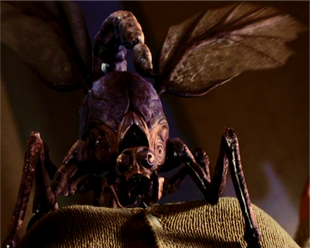 Scorpion-Flies are plump, flying creatures, about 2-4 feet long and the prey of the Pterobuzzards. They are also nocturnal creatures, attracted to light at night, and (in the film) living in what appear to be hives during the day. They are known for landing on the Grocery Store's windows at night, attracted by the light inside.

Five Scorpion-Flies escape into the store through the broken window, one of them managing to sting Sally. Two are crushed or cut to death by Tom and Amanda, while the other three are eaten by a Pterobuzzard.

At the end of the film, what appears to be a Scorpion-Fly hive is seen attached to a tree.﻿ When a military convoy passes by the area and the mist dissipates, a soldier incinerates the hive with a flamethrower.

The Scorpion-Flies are described as plump, segmented creatures with a stinger/sex organ, burnt-colored flesh and eyes on stalks protruding from their heads.

The Scorpion-Flies in the film don't have eyestalks, have hard, purple, segmented shells and resemble a cross between a wasp and a scorpion. Their stingers also contain a neurotoxin which causes massive swelling and suffocation in minutes.

A Scorpion-Fly on the grocery store windows.

Add a photo to this gallery
Retrieved from "https://stephenkingsthemist.fandom.com/wiki/Scorpion-Flies?oldid=9078"
Community content is available under CC-BY-SA unless otherwise noted.