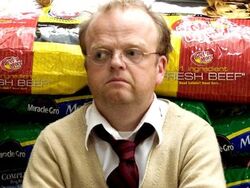 Arguably retaining more of his sanity than any of the other survivors during the mist phenomenon, Oliver Weeks is the assistant manager of the Grocery Store. He was killed by an Arachni-Lobster during the escape from the market.

Ollie lived up on Highland Lake and appears to be afraid of girls. He also stated that he fought in Vietnam. When the Mist appears and spreads across Bridgton, Ollie tries to keep the store patrons calm, and is one of the few, along with David, to suspect that the mist contains something dangerous.

When Jim, Norm and Myron contemplate sending Norm out to unblock the generator's exhaust, Ollie supports David's caution of something in the Mist, but is unable to convince the other three otherwise. After Norm is killed by a swarm of the Tentacles from Planet X as a result, and David lashed out at Jim/Myron, Ollie manages to calm David down, and supports David when he tries to warn the people in the market of the creatures in the Mist. Ollie also stands up to Bud in the process and frequently proves his sanity and bravery.

Ollie wields Amanda's gun as the best shooter in David's group. On the second day of the disaster, Ollie is part of the expedition to the King's Pharmacy, and one of the few survivors.

On the third day, when Mrs. Carmody tries to sacrifice Billy and Amanda, Ollie reluctantly shoots Mrs. Carmody to prevent a massacre. Moments later, Ollie is attacked by an Arachni-Lobster during the escape from the market and is ripped in half.

Differences Between the Novella and Film[]

David and Ollie were good friends and got along well. In the first half of the film, Ollie seems to instill a sense of calm and reason in David when he feels rage.

Initially, Bud regarded Ollie without respect and threatened to fire him for drinking on the job. However, during the phenomenon, Ollie calmly and firmly stood up to Bud when he had to. Despite this, when Ollie decided to leave the market, Bud did say that he did not blame Ollie.

Ollie didn't believe in Mrs. Camody's cult beliefs and shot her to prevent her cult from sacrificing David and his group, although reluctantly.