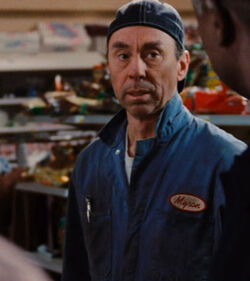 A member of Mrs. Carmody's congregation in the novella, and David's group in the film, Myron LaFleur appears to be best friends with Jim Grondin, and also contributed to Norm's death.

Myron, along with Jim Grondin, are mechanics at the Grocery Store, and are trapped inside it along with the patrons and the rest of the store's staff when the Mist appears and engulfs the town outside.

Jim, Myron, and Ollie later go to investigate the emergency generator, and are met by David, who claims he heard something outside the loading dock. Jim and Myron refuse to believe David, dismissing it as David simply being scared, and later as an attempt at gaining attention.

Myron is the most enthusiastic other than Norm himself to send Norm out, and when Norm is sent out, Jim and Myron watch in shock as Norm is dragged away by a swarm of the Tentacles from Planet X. After Norm's death, Myron tries to apologize, but David instead viciously attacks him until Ollie calms him down.

Consumed in guilt over Norm's death, Jim and Myron drink heavily, and also support David and Ollie's claim that there are dangerous creatures in the Mist. By afternoon the next day though, Myron has become one of Mrs. Carmody's followers.

The next morning, Myron, along with Mr. McVey, try to sacrifice Billy and Amanda under Mrs. Carmody's orders, but Myron and the other followers realise what they're doing when Mrs. Carmody is killed by Ollie, and allow the group to leave.

In the film, Jim and Myron's roles from the novella are mostly reversed. After Norm is killed by the Tentacles from Planet X while Jim and Myron watch, frozen with shock, the two, consumed in guilt, drink heavily.

During the first night, Jim and Myron put up worklights to use in case a creature from the Mist breaks into the store. When Pterobuzzards and Scorpion-Flies arrive, Jim and Myron turn on all the worklights, unintentionally attracting even more of the creatures.

The next day (in a deleted scene), when Myron sees Jim praying among Mrs. Carmody's followers, he tries to snap Jim back to reality, but all he receives in response is a vicious punch from a shaken and insane Jim.

The next day, Myron successfully escapes with the rest of David's group from the market, but, along with Bud and Ambrose, is separated from the rest of the group when he sprains his ankle. When Bud, Myron and Ambrose try to get through the parking lot to David's Land Cruiser, they are attacked by a Gray Widower which pounces on Myron and kills him.

Myron was good friends with Jim, and the two were shown to stick together and share a dark sense of humor. In a deleted scene from the film, when Myron found that Jim had become a follower of Mrs. Carmody, he was horrified and tried to calm Jim down and snap him back to reality.

Jim and Myron were on good terms with Norm, and when they blamed themselves for his death, they drank heavily.

Jim and Myron appeared to try and ignore Ollie before Norm's death.