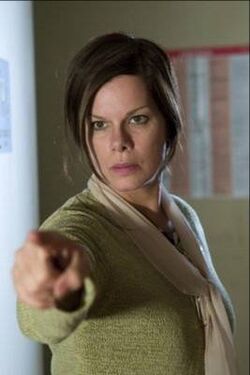 Mrs. Carmody is a fanatically religious woman who lives in the town of Bridgton. She is the main human antagonist of both the novella, The Mist, and the film adaption.

Before the Mist appeared, Mrs. Carmody owned an antiquity shop, and her father hunted and performed taxidermy on animals.

She is one of the patrons trapped in the Grocery Store when the Mist appears and engulfs the town outside, and is convinced that the Mist is a punishment from God for mankind's sin and dissolution; particularly after David and Ollie explain their encounter with the Tentacles from Planet X in the storage room.

Mrs. Carmody attempts to convince the other market patrons that the Mist is a divine punishment, but is stopped when she is hit her across the face and threatened by Ollie. However, Mrs. Carmody shows no fear of Ollie's threat, and predicts that the creatures in the Mist will claim another victim at night.

Instead of being weakened by the siege mentality caused by the Mist, Mrs. Carmody is strengthened by it, and by the second day, she successfully gains a small group of followers, driven mad by the trauma of the phenomenon, which quickly grows into a congregation.

On the morning of the third day of the disaster, Mrs. Carmody attempts to sabotage David's group from escaping the market by destroying the supplies they gathered, and then orders her followers to first sacrifice Billy and Amanda, and then to massacre David's entire group. However, she is shot by Ollie and killed.

Mrs. Carmody's death led to the breakup of her congregation, and nearly all of the people who she had brainwashed were snapped back to reality after they realized all that they had done, and the fact that her death showed that she did not have divine protection as she had preached.

Differences Between the Novella and Film

Amanda initially tried to befriend Mrs. Carmody, but Mrs. Carmody spitefully turned her kindness down, saying that if she "wanted a friend like her, she would squat over and [poop] one out". Later, when Amanda hit Mrs. Carmody to shut her up, Mrs. Carmody darkly threatened her in response. She later tried to sacrifice Amanda, but was stopped when Ollie killed her.

In the book Carmody somehow learns of David and Amanda's affair, and refers to her as a "whore" for the remainder of the book. In the film, this subplot is omitted.

Mrs. Carmody appeared to be angered by David's and his group's attempts to find help and maintain sanity among the survivors. She later tried to have David murdered, but her death saved his life.

Irene deeply hated Mrs. Carmody and was not afraid to show it. When Irene stoned Mrs. Carmody in the middle of a preaching with a can of peas, Mrs. Carmody tried to attack Irene in a fit of anger. Mrs. Carmody later tried to have Irene sacrificed, but was killed before it could be done.

Initially, Jim drunkenly mocked Mrs. Carmody for her fanatic beliefs, and was quick to threaten her. However, after Jim became one of her followers, he only became calm when she soothed and spoke to him. Her death made him snap back to reality.

She is shot and killed by Ollie Weeks when she attempts to block his group from leaving the store.