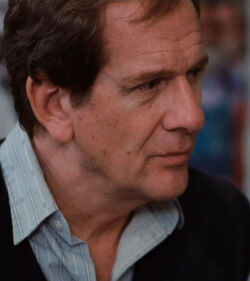 Michael Hatlen is a town selectman, and one of the leaders of the market. He is killed by Gray Widowers during the expedition to King's Pharmacy.

Mike Hatlen is one of the patrons trapped inside the Grocery Store when the Mist appears and engulfs the town outside. He is against the David's idea to leave the supermarket for good. He is one of the members of David's group who takes part in the expedition to King's Pharmacy, where he is killed by a Gray Widower's corrosive web strands.

Differences Between the Novella and FilmEdit

Retrieved from "https://stephenkingsthemist.fandom.com/wiki/Michael_Hatlen?oldid=9995"
Community content is available under CC-BY-SA unless otherwise noted.