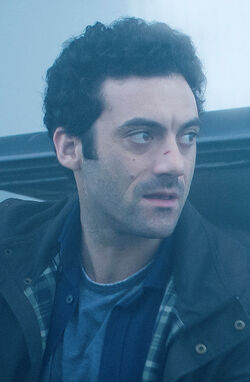 Kevin Copeland is one of the main characters in The Mist television show, played by Morgan Spector.

Kevin is a former journalist turned children's book writer, he lives with his wife Eve and step daughter Alex in Bridgeville, Maine. Kevin is not the biological father of Alex; it is revealed near the end of the season that Connor Heisel is her father.

Against his wife's wishes, he allows their teenage daughter to go to a party. At the party she is drugged and raped; he and his wife are estranged, because of this, when the mist arrives.

When the Mist arrives, Kevin is separated from his wife and daughter, and resolves to find them at all costs.

Kevin then releases 2 prisoners in hope of finding his wife and daughter.

After being reunited with his family at the mall, they are kicked out of the mall by the insane mall survivors. Disgusted and enraged by what they did to his family a revengeful Kevin uses the Humvee as a battering ram and reverse through the doors of the mall allowing the mist to enter the mall and leave the survivors to die gruesome deaths.

Satisfied and with no remorse, he and the survivors flee the town.

This article is a stub. You can help Stephen King's The Mist Wiki by expanding it. 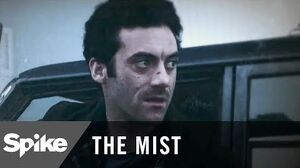