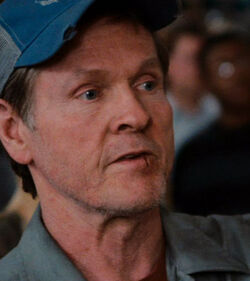 James Grondin is a member of David's group, but, in the film, later a member of Mrs. Carmody's congregation, and also the expedition to King's Pharmacy.

Jim and his sister, Pauline, were taught at school by Ms. Reppler. Jim is, along with Myron LaFleur, a mechanic at the Grocery Store, and the two are trapped inside it along with the patrons and the rest of the store's staff when the Mist appears and engulfs the town outside.

Jim, Myron and Ollie later go to investigate the emergency generator, and are met by David, who claims that he heard something outside the loading dock. Jim and Myron refuse to believe David, dismissing it as David simply being scared, and later as an attempt at gaining attention.

However, when Myron sends Norm outside through the loading door, Jim and Myron watch in shock as Norm is dragged away by a swarm of Tentacles from Planet X. Feeling responsible for Norm's death, Jim and Myron drink heavily, and also support David and Ollie's claim that there are dangerous creatures in the Mist.

The next day, Jim is part of the expedition to King's Pharmacy nextdoor for supplies, but separates from the rest of the group when they find a decapitated corpse at the pharmacy. After separating from the group, Jim is attacked and presumably killed by an unseen creature.

In the film, Jim and Myron's roles from the novella are mostly reversed.

Jim is the most enthusiastic other than Norm himself to send Norm out, and after Norm's death, he rebuttals being the most responsible for it, causing David to viciously attack him until Ollie calms David down. Consumed in guilt, Jim and Myron drink heavily, and Jim frequently yells at Mrs. Carmody for her outward zealotry.

During the first night, Jim and Myron put up worklights to use in case a creature from the Mist breaks into the store. When Pterobuzzards and Scorpion-Flies arrive, Jim and Myron turn on all the worklights, unintentionally attracting even more of the creatures.

The next day, Jim is part of the expedition to King's Pharmacy, and narrowly escapes back to the market with the others. However, his experiences at the pharmacy cause his mind to snap, and he becomes one of Mrs. Carmody's most loyal followers, to the extent that he is openly hostile to even Myron, his best friend, and Irene Reppler.

When Jim eavesdrops on Jessup and David, he takes Jessup out for Mrs. Carmody to interrogate on the origins of the Mist. When Jessup explains how the Arrowhead Project could have caused the Mist, Jim, Mr. Mackey, and some of Mrs. Carmody's other followers, stab Jessup and then lock him out of the market as a sacrifice to the creatures in the Mist.

The next morning, Jim, along with Mr. Mackey, tries to sacrifice David's group under Mrs. Carmody's orders, but when Mrs. Carmody is shot and killed, a horrified Jim drops his knives after Ollie points the gun at him. When Bud Brown runs back to the store, Jim opens the door, letting Bud back in; suggesting that he has at least partially come back to his senses with Mrs. Carmody's death.

Jim is later seen along with Bud and Mrs. Carmody's other stunned ex-followers watching David's group drive away. He has a look of guilt on his face, indicating that he is very ashamed over what he had done for Mrs. Carmody; including attacking his now-deceased friend (whose death he appears to be aware of), killing a soldier, and trying to murder an innocent little boy and several other people.

Since people from the market are very briefly glimpsed aboard the rescue trucks at the end, it can be assumed that Jim was rescued.

Jim was good friends with Myron, and the two were shown to stick together and share a dark sense of humor, but Jim began hating Myron after becoming a follower. In a deleted scene from the film, when Jim's mind snapped and Myron tried to snap Jim back to reality, an insane Jim attacked and punched Myron, screaming at him before Mrs. Carmody calmed him down. He later tried to kill Myron alongside David's group and apparently later regretted what he had done after Mrs. Carmody's death and was saddened after learning that his best friend was killed.

Before Norm's death, Jim became increasingly annoyed at David's fear that the mist was dangerous, eventually to the point of threatening to punch his teeth out. However, after Norm's death, Jim tried to apologize to David, and began to listen to him and Ollie more. After returning from the pharmacy with David and many others, he was traumatized and followed Mrs. Carmody and her cult.

After becoming a follower, Jim became extremely hostile towards David and punched the latter in the face when he tried to save Jessup. When Mrs. Carmody ordered Billy's sacrifice and fighting broke out between the two groups, Jim, armed with two knives, and David, armed with a mop handle, were shown fighting, with Jim repeatedly jabbing at David with his knives in an attempt to stab him. When Mrs. Carmody was shot dead and David gets his group ready to leave, Jim backs away in fear when David passes him by.

Initially, Jim drunkenly mocked Mrs. Carmody for her fanatic beliefs, and was quick to threaten her. However, after Jim became one of her followers, he became calm when she soothed and spoke to him, but was violent towards others. After Mrs. Carmody was killed, he snapped back to reality and appeared to deeply regret everything he had done.

Jim appeared to respect Ms. Reppler, who taught him at school. After he became a follower of Mrs. Carmody, he lost his respect towards Irene and began hating her due to the fact that she was an unbeliever. Later, he, ordered by Mrs. Carmody, attempted to kill her alongside everyone else in David's group but Mrs. Carmody's death prevented him from doing so.

Jim and Myron were on good terms with Norm, and when they blamed themselves for his death, they drank heavily.

Jim and Myron appeared to try and ignore Ollie before Norm's death. He attempted to kill Ollie when Mrs. Carmody ordered the sacrifice of David's group, but when Ollie pointed the gun at him after Mrs. Carmody's death, a shocked and terrified Jim immediately backed off.