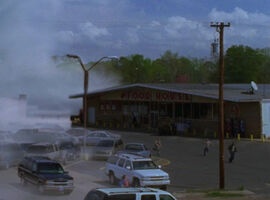 The Grocery Store of Bridgton, Maine, is the main setting of The Mist and the film adaption. It is a supermarket and is, along with King's Pharmacy, part of an outdoor shopping mall. In the novella, the Grocery Store is that of Federal Foods, Inc., and in the film, it is called the Food House.

The Grocery Store had apparently existed since before David was thirteen. When the Mist appeared, the staff and patrons used the store as a sanctuary from the creatures in the Mist. The building sustained minor damage from tremors and attacks by the creatures.

The store suffered some minor damage during the phenomenon caused by the tremors, and Pterobuzzards from plucking Scorpion-Flies from the window.