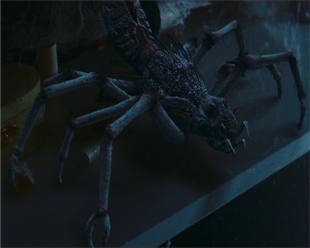 Gray Widowers are deadly, spider-like predators, each about the size of a dog, which have the ability to produce corrosive spiderwebs that can burn through materials like clothing and flesh.

Due to the doors of King's Pharmacy being left propped open when the Mist reached the pharmacy, the pharmacy patrons were smelled out by a pack of Gray Widowers which proceeded to overrun the pharmacy and slaughter the patrons.

During the escape from the market the next day, a large Gray Widower attacks Hattie and cocoons her in its webbing, killing her. It then scuttles off through the Mist and out of sight with Hattie's cocooned remains.

Shortly after, another Gray Widower tries to follow David into his Scout, but David closes the door on it before it can get in. With all the doors and windows of the Scout closed, the scent of the survivors within is cut off from the Gray Widower, making them practically invisible to it. Thus the Gray Widower abandons the Scout when it cannot pick up the occupants' scent.

Gray Widowers apparently attacked the Draytons' home when the Mist reached it, killing Stephanie and cocooning her body to the broken window in web silk.

As the doors of King's Pharmacy were propped open when the Mist reached it, the pharmacy patrons were smelled out by a pack of Gray Widowers which proceeded to overrun the pharmacy and capture and cocoon the patrons in cobweb-like webs. They killed all the patrons except for the MP, whom they used as a host for Gray Widowletts and laid thousands of eggs under his skin.

About a day later, survivors from the Food House nextdoor arrive at the pharmacy to collect medical supplies in time to witness the MP hatch the Gray Widowletts. The adult Gray Widowers then reveal themselves to the group and launch an attack, killing Bobby Eagleton and Mike Hatlen and feeding their bodies to the newly-hatched Gray Widowletts.

The next day, during the escape from the market, a Gray Widower attacks Bud Brown, Myron LaFleur and Ambrose Cornell in the parking lot; killing Myron. Ambrose is soon after attacked, surrounded and killed by a pack of Gray Widowers.

When David's group is driving south through the Mist, they discover a school bus which was apparently attacked by Gray Widowers when the Mist reached it, and the children's bodies cocooned in web silk.

They can also fire strands of their corrosive webbing as projectiles from the oval-shaped orifice on the upper-belly, and produce low, vibrational, mewling noises.

Like in the novella, they can produce corrosive web strands and fire them as projectiles, but they can also lay eggs in living hosts. These eggs will appear as thousands of bulging boils on the host's skin, which each burst open after about a day to release the new hatchlings. The hatchlings, Gray Widowletts, appear identical to the adults, except they are a brownish colour, and the size of terrestrial spiders.

In the film, the Gray Widowers have a parasitic life cycle: they capture living hosts and lay thousands of eggs under each one's skin. After about a day, the eggs hatch into thousands of Gray Widowletts which eat their way out of the host's skin, killing it.

Early concept art for the film.

Add a photo to this gallery

Retrieved from "https://stephenkingsthemist.fandom.com/wiki/Gray_Widower?oldid=7943"
Community content is available under CC-BY-SA unless otherwise noted.