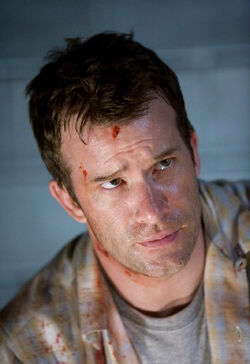 David Drayton is the father of Billy Drayton, the husband of Stephanie Drayton, and the main protagonist of both the novella The Mist, and the film adaption.

David's father was apparently a famous and successful artist, and David attempted without success to be better than him. He also went to the University of Maine, and according to Jim Grondin, he only went to college because he has the jitters.

He married Stephanie Stepanek on December before 1975, and had a son, Billy, with her. David soon became a commercial artist. In 1975, David was sued by his neighbor, Brent Norton, causing a grudge between the two.﻿

In 1980, David's home was damaged by a massive storm and his boathouse destroyed. He, Billy and Norton use his car to get into town to the local Grocery Store, and are trapped inside when the Mist appears and engulfs the town outside.

David searches the loading dock for a blanket with which to cover up a shocked Billy, but instead discovers the generator choking from something blocking the exhaust pipe, and something on the other side of the loading door moving against it. He tells deputy manager Ollie, mechanics Jim and Myron, and bag-boy Norm, who refuse to believe him except Ollie.

Jim and Myron, despite David and Ollie's protests, send Norm out through the loading door to unblock the generator, but he is attacked by a swarm of the Tentacles from Planet X. David attempts to save Norm from the Tentacles, but when a Tentacle moves near him, he is forced, for Billy's sake, to leave Norm to be dragged off to his death. David then closes the loading door with a mop, and lashes out at Myron for sending Norm to his death until Ollie manages to calm him down.

David, Ollie, Jim and Myron attempt to convince the people in the market of the dangers in the mist, but fail to convince Bud, Norton, or a handful of people (Bud until showing him a Tentacle severed by the loading door). The people convinced then barricade the store windows with bags of dog food and soil, and seal up the cracks in them with duct tape.

Later, David once again makes a failed attempt to convince Norton and his group of the dangers in the mist before they go out, but does manage to convince one of Norton's followers to tie a clothesline round his waist to let the patrons know when the group gets over 300 feet from the store.

Following the attack on Norton's group, David begins to develop feelings for another patron of the market, Amanda Dumfries, and begins to worry about Steff. At night, when Scorpion-Flies and Pterobuzzards break into the store, David uses a torched mop to burn and beat a Pterobuzzard to death.

The next morning, David leads an expedition to King's Pharmacy for medical supplies, but they are attacked by a group of Gray Widowers, and David, Ollie and Reppler narrowly escape back to the market.

David theorizes to the rest of his group that the creatures in the Mist hunt through smell, and plans an escape from the market the following morning, and sleeps with Amanda that night.

The following morning, David and his group attempt to leave, but are stopped by Mrs. Carmody and her followers. Mrs. Carmody orders that Billy and Amanda be sacrificed, but is shot down by Ollie. David's group are allowed to leave, and David, Billy, Amanda and Reppler successfully escape to David's Scout.

David attempts to reach his home to pick up Steff, but is unable to get there due to fallen trees. Heartbroken, David drives the group south, then spends the night in a Howard Johnson's near Exit 3. He listens to the radio, and possibly hears the word "Hartford" broadcast. With that spark of hope, the next morning, David prepares to drive the group on into an uncertain future.

David's role in the film is almost exactly the same, except he lashes out at Jim instead of Myron, discovers Steff killed by the Gray Widowers, and instead of driving into an uncertain future, he keeps driving the group south until his Land Cruiser runs out of fuel.

He then shoots the four other people in the car with the last four bullets in Amanda's gun to spare them a more brutal death by the creatures in the Mist.

David then exits his Land Cruiser to allow himself to be killed by the creatures in the mist, but instead sees a military convoy carrying other survivors, many from the market, pass by and the Mist dissipate to reveal the military winning the war against the monsters of the Mist. Realizing that he killed his own son and three innocent people just moments before they would have been rescued, that they had been driving away from rescue, and that they never should have left the market in the first place, David falls to his knees, screaming, as two soldiers watch him in confusion.

David's fate afterwards is unknown, but the future of his sanity seems very bleak.

David had a very good relationship with his son, and loved him deeply. He became highly protective of Billy during the mist phenomenon, and was hurt just by imagining the trauma Billy was experiencing during the disaster.

David and Stephanie were apparently a happily married couple, and Stephanie was shown to find David's sarcastic comments funny. In the film, when he found her body, he said that he told her he fix it and his grandfathers tree broke open a front window,

Upon meeting her when the Mist appeared, David became increasingly attracted to Amanda, in the novella eventually to the point that he had an affair with her and slept in the store's office with her.

David was good friends with Ollie, and the two got along very well.

David and Norton had a mutual grudge due to the property dispute over Norton's tree, and had a way of casually expressing their dislike for one another on a small scale. When Norton mistakenly believed that David was trying to get back at him for the lawsuit, this instantly changed. He began taunting and angering David, and even became violent towards him when their argument over the Tentacles from Planet X got forceful.

Like many others, David strongly disliked Mrs. Carmody, considering her a cunt and a witch.

David trusted Hattie with looking after Billy whenever he was busy or preoccupied, and was saddened by her death in the novella.