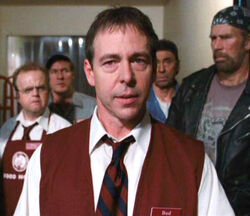 The manager of the Grocery Store, Robert "Bud" Brown maintains a relative degree of his sanity during the mist phenomenon and tries to maintain order and control in the market.

Bud, along with the staff that had shown and many market patrons, is trapped in the market when the Mist appears and engulfs the town outside.

Bud attempts to maintain order when the Mist causes a siege mentality within the store, and initially refuses to believe David, Ollie, Jim and Myron's story of Norm's death. However, he is at least partially convinced otherwise when David shows him a severed Tentacle in the loading dock. He helps barricade the store display windows with fertilizer and dog food bags.

David's group offer Bud a chance to escape the market with them, but Bud politely refuses; though he admits that he doesn't blame Ollie for leaving with the group.

Bud escapes with the rest of David's group from the market, but, along with Myron and Ambrose, is separated from the rest of the group when Myron sprains his ankle.

When Bud, Myron and Ambrose try to get through the parking lot to David's Land Cruiser, they are attacked by a Gray Widower which pounces on Myron and kills him, causing Ambrose and Bud to split up. A terrified Bud retreats back to the market and Jim lets him back inside. Bud and Mrs. Carmody's ex-followers watch David's group from the market as they drive away.

In the novella, when Billy broke down shortly after the Mist hit, Bud became quickly annoyed with Billy's crying. In the movie, we can see Bud protecting him and Amanda during the attack of Mrs. Carmody's followers.

Initially, Bud regarded Ollie without respect and threatened to fire him for drinking on the job. However, Bud was shocked when Ollie calmly stood up to him. Despite this, when Ollie decided to leave the market, Bud did say that he did not blame Ollie.

Bud was quick to side with Norton when the Mist appeared, though he switched to David's group upon seeing a severed Tentacle.

When a fight ensued between David and Norton, Bud was quick to side with Norton and give David a warning. However, when he saw a Tentacle from Planet X and sided with David's group, he expressed less dislike of David.

In the novella, Bud and Sally were shown not to get along well at all and to be aggressive to one another when one provoked the other. However, during these arguments, Bud was still shocked at how Sally was standing up to him.