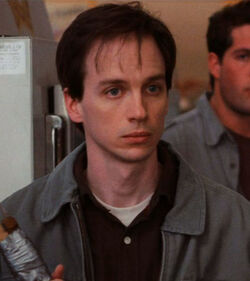 Bobby Eagleton is the film replacement for Buddy Eagleton and the brother of Joe Eagleton.

When Joe is horribly burnt during the first night of the phenomenon, Bobby stays by his side in the back room. He absolutely refuses his wish to end his suffering by shooting him.

The next morning, Bobby is part of the expedition to King's Pharmacy for pain killers and antibiotics for Joe's burns (he is the person which is the most willing to go, he even proclaims that he would go alone if it would be necessary), and passes out when a Gray Widower lassos his leg with its acidic web strands. The others try to drag the unconscious Bobby back to the market with them, but Bobby dies of the leg wound in his unconsciousness.

His body is left by Jessup to be devoured by the pursuing Gray Widowletts. Bobby apparently died in vain, as Joe died of his burns shortly after the remaining members of the expedition escaped back to the market.

Bobby after being killed
Community content is available under CC-BY-SA unless otherwise noted.
Advertisement