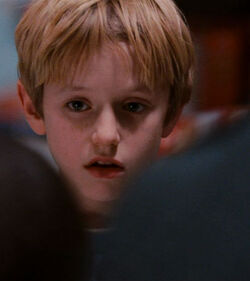 William Drayton is David and Stephanie Drayton's seven-year-old son, born circa 1973 in the novella and on March 23, 2000 in the film.

Billy Drayton was born circa 1973 (2000 in the film) to David Drayton and Stephanie Drayton.

In 1980, Billy, his father, and their neighbor, Brent Norton, go into town to buy tools from the Grocery Store to clean up the aftermath of a storm, but instead witness the Mist appears and engulf the town outside.

Billy is visibly traumatized and weakened by the experience and spending an entire two days beseiged by the creatures in the Mist in the store, but is looked after by David, Amanda, and, most effectively, Hattie.

Mrs. Carmody attempts to sacrifice Billy and Amanda, but is killed. Billy survives the escape from the market, and is driven in his family's car south by his father, in an attempt to get clear of the Mist.

David keeps driving south through the Mist with Billy, Amanda and Reppler, into an uncertain future.

When the Land Cruiser eventually runs out of fuel, Billy wakes from a nap in time to be shot by his father to uphold the latter's promise to Billy that he would never let the creatures in the Mist get him.

However, Billy's death is apparently in vain as a military rescue convoy arrives moments later.

Billy had a good relationship with his mother as well, although he did not usually listen to her when she warned him about running around.

Billy appeared to like Amanda, and when he awoke at night in the market during the disaster, he was able to sleep more peacefully when Amanda warmly soothed him.

Hattie was very warm and caring to Billy, and Billy enjoyed playing games and other things with her.

Billy appeared to be scared by Mrs. Carmody, and didn't wish to be around her at at all.