The Behemoth (also known as "The Impossibly Tall Creature") is a gigantic, six-legged creature encountered by the escapees from the Grocery Store while driving through the Mist.

The Behemoth never harms any living thing and doesn't appear to be hostile in nature, but it is said to be larger than anything that ever lived on Earth. Its lack of hostility could be due to its sheer size - it simply does not notice anything beneath it. Its very size is a hazard and it frightened the survivors into thinking that there was nothing any better ahead of them.

The Behemoth passes directly over David's Scout while the Scout is driving through the Mist.

While the escapees from the market are driving the Land Cruiser on an unknown highway through the Mist, the Behemoth moves across the highway directly in front of the Land Cruiser, flattening utility poles beneath its feet.

The creature's exact size is never specified, but it has six massive legs.

The Behemoth's legs have hundreds of Scorpion-Flies attached to them, and slaty-grey skin mottled in places to dark brown, but apart from that, the creature is unseen.

David gets an impression that the Behemoth's size would make a blue whale resemble a trout and also dwarf the largest dinosaur. Its weight is sufficient to leave footprints the size of large SUVs in solid concrete. It seems to be larger than the Film version.

The Behemoth has six double-jointed legs, each about 18 feet tall, hundreds of multiple-jointed appendages on its underside, and tentacles above its head. The Behemoth's size is estimated at over 240 feet, larger than anything that ever lived on earth. 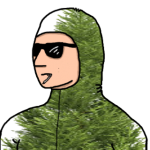