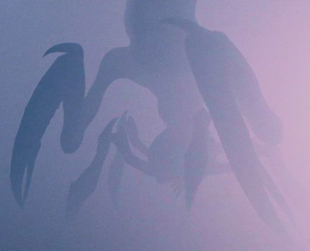 The Arachni-Lobster is a large predator, which kills its victims by cutting them in half in its claws or biting their heads off.

An Arachni-Lobster grabs Ollie during the escape from the market and cuts him in half. It then retreats through the Mist and out of sight with the two halves of Ollie's body, most likely for food.

The creature which attacked Norton's group may have been an Arachni-Lobster. When Jessup is thrown out of the market by Mrs. Carmody's followers as a sacrifice to the creatures in the Mist, an Arachni-Lobster smells him out and bisects him in one of its claws.

The next day, the Arachni-Lobster attacks Ollie Weeks during the escape from the market, cutting him in half in one of its claws. It then throws his bisected body away and vanishes through the Mist out of sight.

The Arachni-Lobster is described as huge and having a lobster-red, multisegmented, scorpion-like body and lobster-like claws. It seemed to be larger than the Film version.

In the film, the Arachni-Lobster is roughly two stories tall, with fleshy, not entirely insectile skin. The base of its slouched torso stands on six arthropod-like legs, while the topside sports a pair of much larger, pincer-tipped arms which it holds to its chest like an enormous mantis. Its head seems to consist of little more than an enormous, vertebrate-style maw lined with needle-like teeth, with the top of its cranium arching over the back. Its coloration is difficult to determine, as it never appears onscreen as anything more than a silhouette.

Concept art of the Arachni-Lobster.