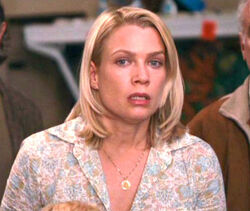 Amanda Dumfrey is a young third-grade teacher at the local school, and fell in love with David Drayton when the Mist appeared.

Amanda has a husband who is away on business in New York, but was given a pistol to carry while he is away. She is one of the many patrons trapped in the Grocery Store when the Mist engulfs the town outside. She, along with David and Hattie look after Billy, and she and David start an intimate relationship over time.

On the third day of the phenomenon, Amanda, and the rest of David's group attempt to leave the market, but are stopped by Mrs. Carmody's, who attempt to sacrifice her along with Billy, but break up with Mrs. Carmody's death.

She successfully escapes to David's Scout along with David, Billy and Reppler, and drives south with them in an attempt to get clear of the Mist.

Amanda and the rest of David's group who escape the market keep driving through the Mist, into an uncertain future.

Amanda and the rest of David's group keep driving through the Mist until the Land Cruiser eventually runs out of fuel. She, along with Irene and Dan, accepts her fate and is shot by David to spare her a more violent death.

Her death is apparently in vain, however, as a military rescue convoy arrives moments later.